This post has absolutely nothing to do with baking or food. But it is about something I made...

At the end of August, we went our first family road trip.
The cabin we were staying at was about a 5 hour drive from our house.
Five hours isn't that long, but when two of your travelling companions are incredibly active, restless, non-stop talking little girls (2.5 and 4 years old), that think driving on the highway is the worst thing ever, five hours can feel like a loooooong time!

So a few weeks before leaving I decided to make them activity books for the drive. I also thought they'd be good to have at the cabin in case there was down time.

My background is Early Childhood Education, so as time consuming as it is, I like to make all those fun preschool activities like felt board stories and file folder games.

Our 4 year old Lauren tends to get bored with things pretty quickly, so I knew I had to step it up and make something that would keep her interested.

Here's what I made!

I had the girls each pick out a special binder.


Then I printed off a whole bunch of coloring pages of things that they like such as; Alvin and the Chipmunks, princesses, cars, superheroes, Lego Friends, My Little Pony, Shopkins and a lot more (a lot more!). 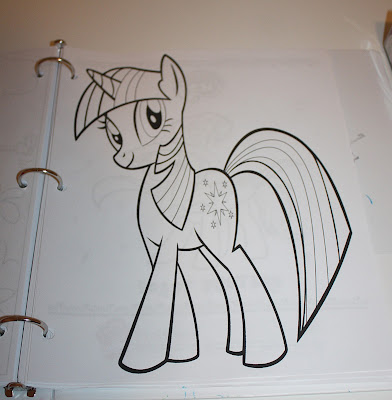 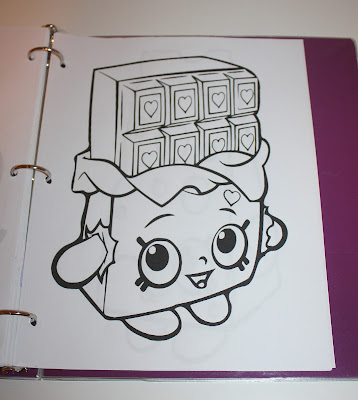 They also got to choose a pencil case that I filled up with regular crayons and the kind that twist up (below). 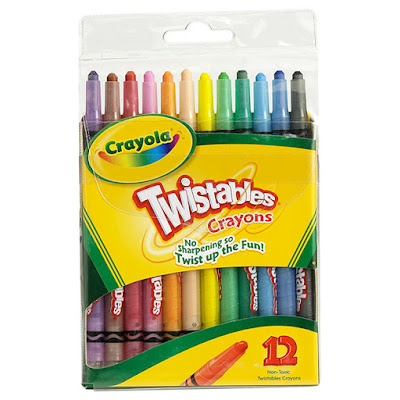 I made sure to get them pencil cases with 3 ring holes so they could go in the binders. They were similar to this.

These were a last minute idea that turned out to be a huge hit with both girls! I got plastic pencil boxes from the dollar store and filled with pony beads and pipe cleaners so they could make bracelets.
They made several bracelets while we were away. 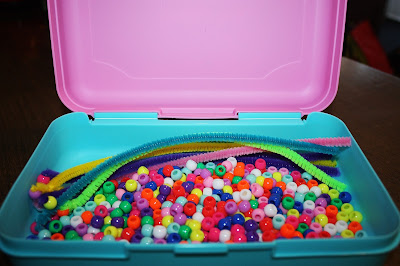 Again, the girls chose the binders that wanted, this time they were 2 inch ring binders with zippers. In the binders I put the following:

I don't know what to actually call this one, but I'm so glad I made them!
They were simple to make and the girls, Lauren in particular, loved them! 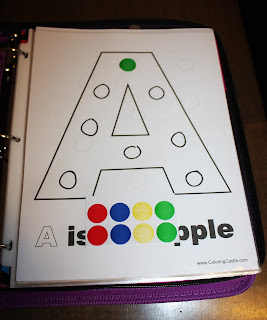 I just printed out the alphabet and then drew little circles on each letter for the girls to put the stickers on. I also put them in page protectors so they can reuse them.

Another really simple activity to make.
I put a bunch of stickers and plain paper in folder so the girls could do some free art if they wanted. 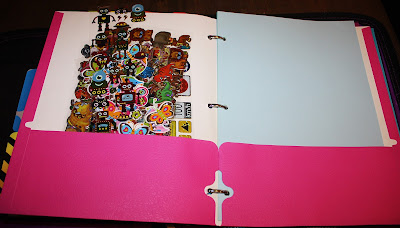 I bought some file folders and felt at the dollar store and got busy cutting and hot glue gunning! 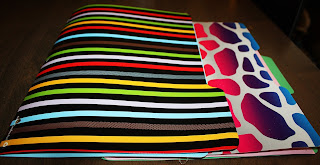 For Lauren's Cupcake game, I glued little jewels on the top of each cupcake and numbered the bottoms.

The object of the game was for her to count the jewels and then match them with the correct number.
I glued the bottoms of the cupcakes to the folder and put a little piece of Velcro on the back of each 'top' of the cupcake as well as on the folder so it would stick. 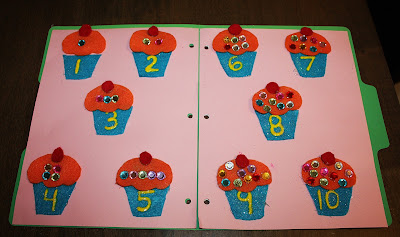 Olivia's was a little bit easier - she just had to match the numbers. 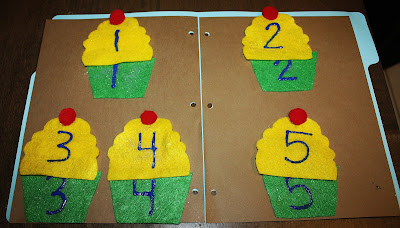 To attach the cupcakes, I did the same as Lauren's game.

This isn't really a game, I just wanted to make a gumball machine because I thought they would be cute. And they are right?!
Even though they are really simple and there's no "game" to play, the girls had so much fun with these! 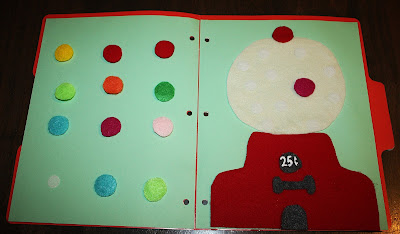 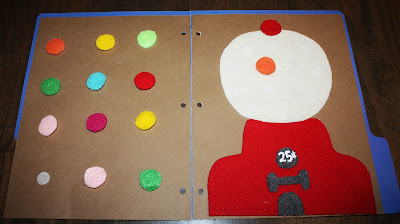 I put little Velcro stickers on the left side to hold the gumballs as well as on the white part of the gumball machine.

I think this was my favorite to activity to make! 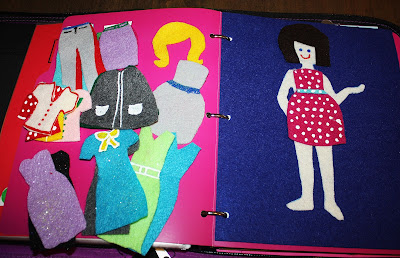 I made one doll and one set of clothes for each girl.
They were the exact same right down to the blond and brown hair pieces, because heaven forbid one girl has a purple dress and the other doesn't!
I had two extra pencil cases lying around, so that's where the clothes get stored.

It's not shown in this picture, but I ended up painting shoes on the girls with fabric paint, because to me, they seemed unfinished.

Unfortunately I didn't get any pictures of the girls using their books while we were away, but they were a bigger hit than I expected.
I was kind of relieved because I spent quite a few late nights making them and quite a few trips to the dollar store!

The girls are actually playing with them right now.

That's pretty much the only reason why I'm able to be working on this on a Thursday afternoon!

And FYI, the little stickers from the alphabet game, can double as  nail polish!! 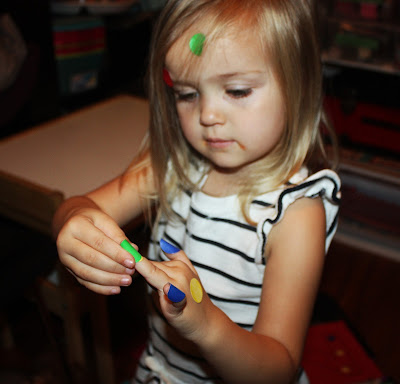 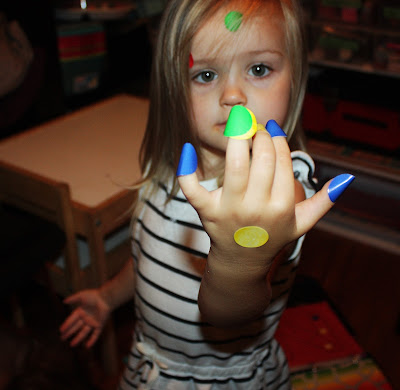