After a bit of a blogging break due to computer/photo editing issues, being tired, dealing with two overly sassy little girls, and somehow having no time, I'm back!!

Just a warning though...this is a very photo and text heavy post!

This year for her birthday, Lauren decided she wanted
a Farmer, Rainbow, Unicorn party.
Yep, that's what she wanted.

Thankfully that idea was pretty short lived and she decided on a Paw Patrol, Farm party.

When Lauren turned 3, we had her party at a farm called Aldor Acres.
Because we live in the city, a lot of her friends and their parents have never been to a farm or seen real farm animals.
At the farm they have tons of animals that the kids can play with, there's a half an hour tractor ride around the farm, and the kids can run. And run. And run! 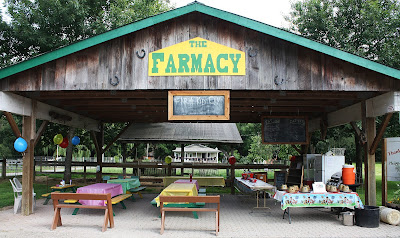 The fact that her 3rd birthday party was such a great experience for not only the kids, but for the adults too, it was an easy decision to have it there again.

The decor was simple because Paw Patrol stuff is everywhere!

The plates, cups, napkins, banner, cupcake liners, table cloths and the tins holding the cutlery and napkins were all from Party City.
The food tents were from Etsy. 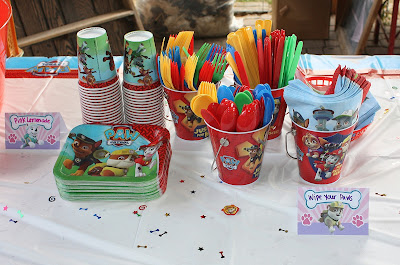 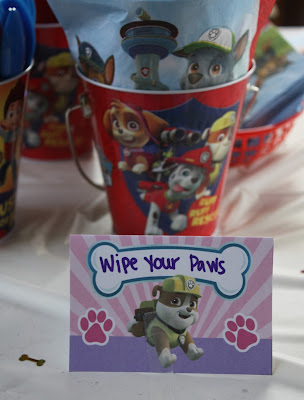 Most of the cutlery I had leftover from other parties, and the rest was from the dollar store. 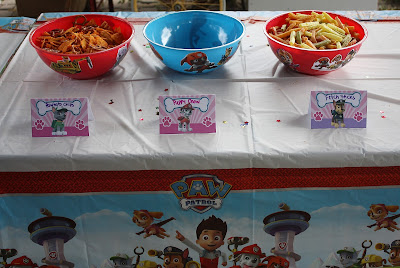 I took a bunch of pictures before the guests arrived, but forgot to get one of the puppy chow, which is pretty unfortunate because it looked and tasted so awesome!
It looked similar to this, but I'll post my recipe below.

I made decorated the bowls that the food was in.
They had these really annoying sticky labels that I couldn't get off. So instead of turning the labels to the back, I cut out a bunch of Paw Patrol Clip Art  and modge poged them onto the bowls.

To drink, we had water, pink lemonade and coffee and tea for the adults. 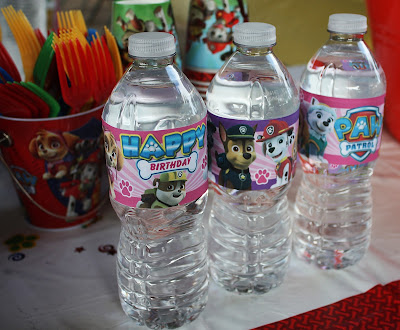 The water bottle labels and food tents were from PrintNatyParty, and the clip art was from  LittleElephantStudio and OctopusDigitalStore all found on Etsy. Of course!

When I plan parties, I tend to go overboard with everything and the goodie bags are no different!
I love making them and it's a cute way to say thank you for coming to my party!

This year I kept it fairly simple by doing an
Adopt-a-Puppy table and Cowboy Hats. 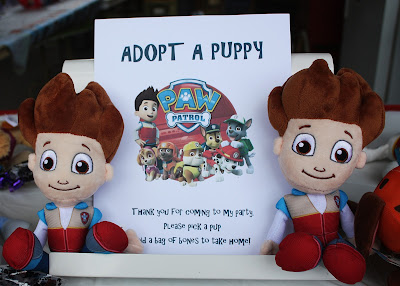 When I first started planning the Adopt-a-Puppy idea, I realized that to buy a Paw Patrol pup for all of the kids coming, it would be very pricey. The pups would cost over $200.00 and that didn't include the other treats I was getting.

But after some desperate late night searching, I found a seller (Crystal Technology, Inc.) on Amazon that had sets of the pups for a really good price and free shipping to Canada.
I was a little concerned as the shipping date was for after the party, but I emailed the seller and they guaranteed the pups would arrive well before the date I needed them for. And they did! 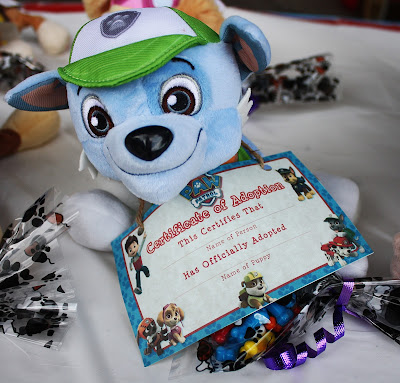 Each pup came with an adoption certificate and a small bag of candy bones.
The kids loved the Adopt-a-Puppy table!

We got Farmer Yumi cowboy hats (from Party City) for the kids because farmers need cowboy hats right? Especially when they get to go on tractor rides around the farm! 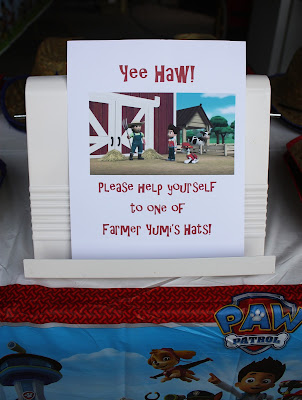 I find that making cupcakes for parties is the easiest. Especially with a bunch of crazy 3 & 4 year olds running around.

Dave made this bone shaped cupcake display for me and decorated it with the Paw Patrol characters.
We were originally going to cover the whole bone with puppy cutouts, but it was SO much work cutting them out so we just randomly placed them (with modge podge) on the bone.

Lauren wanted chocolate cupcakes and rainbow dots cupcakes with icing to match all the Paw Patrol characters.
So to meet the queens demands, I made the cupcakes and 7 different colors of buttercream, all topped off with a little bone candy.
I used the Ateco #827 tip. I love that tip! 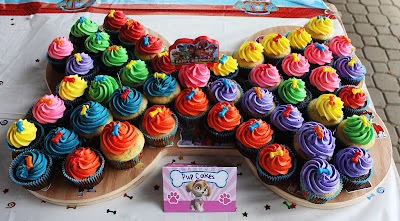 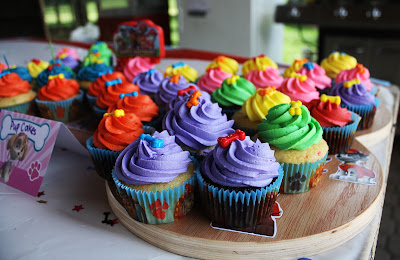 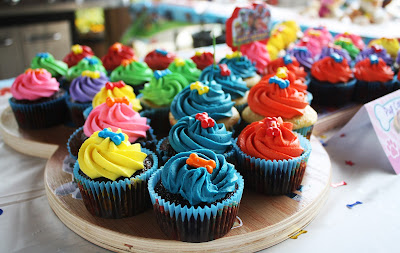 And of course a Paw Patrol candle on the birthday girls cupcake! 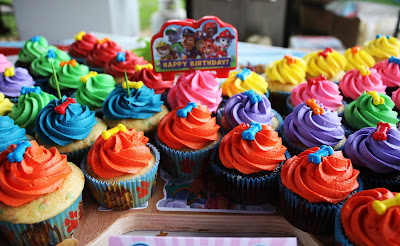 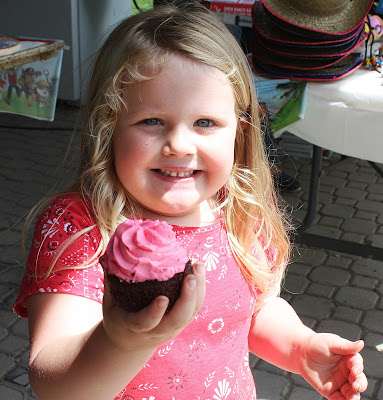 *Other than the chocolate, I didn't really measure out the ingredients.

Place candy melts in separate microwaveable containers and microwave 30 seconds at a time until soft.

With a spoon, stir each color, then drizzle over the pretzel mixture, keeping some chocolate for the next layer.

Let dry for a couple minutes. I placed mine in the fridge for a few minutes because my house is SO hot!

Sprinkle with smarties, candies and sprinkles before drizzling the next layer of colors.

Place baking sheets in the fridge until the chocolate has set, about 30 minutes (or longer).

Once set, gently break the mixture into bite-sized chunks and enjoy!!