On January 12th, Olivia turned two!
It's crazy to think she's already two. It feels like we just brought her home, but at the same time it feels like so long ago.
Either way, I can clearly remember the pain of giving birth to her like it was yesterday! 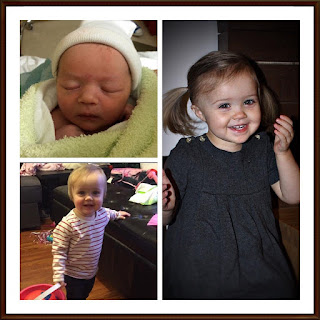 Anyways...
I'm not proud to admit it, but this little girl loves goldfish crackers. LOVES them! I'm not sure where she stashes them, but every time I look at her when we're in the car she has a goldfish cracker.
So on Olivia's birthday I made her a goldfish cake. 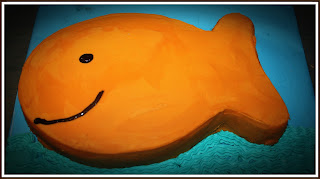 I've mentioned in previous posts that I don't have a go-to white cake recipe yet, so I just used a box cake.
After carving and icing this cake, I decided that I need to find a go-to recipe right away.
Carving this cake was not fun. It was so light and fluffy that when I was both cutting out the fish and icing it, it just crumbled. I managed to get a crumb coat on and then popped it in the fridge for about an hour.

As I iced it, parts of the back kept crumbling away...that's why it became the back. And see those blue "waves" below the fish? Those were to cover up the not so smooth, crumbly bits on the front!
I also had a really hard time getting the buttercream smooth.

But all those issues aside, this was how the birthday girl felt about it... 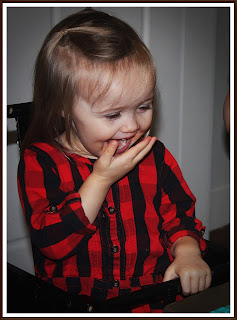 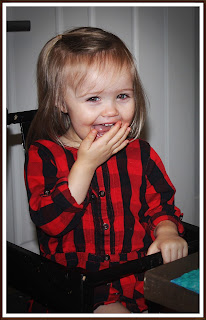 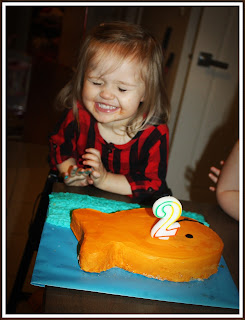 She loved it and that's all that matters! 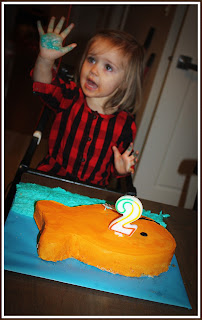 Be sure to check back next week for Olivia's Anna/Frozen Birthday Party!

Directions:
Dissolve the salt in the cream and stir.
Beat butter until slightly fluffy.
Add vanilla.
Add icing sugar, one cup at a time, beating well on medium speed.
Scrape sides and bottom of bowl often.
When all sugar has been mixed in, icing will appear dry.
Gradually add cream until light and fluffy. If icing is too thick, add more cream 1 teaspoon at a time.