When life gives you lemons...

About a month or so ago, I was on a bit of lemon loaf kick.
I'm not sure why, but I was craving it bad!

Olivia loves lemons. Lemon was actually one of her first words. She asks for lemon every time she sees one. Weird, I know.

As a treat, we would sometimes get a piece of lemon loaf from Starbucks. That was until I checked out the nutritional value...after that, we stopped getting it! I shouldn't have been so shocked, it's basically cake. Soft, sweet, tart, lemony cake...I'll just let you think about that for a minute...
We good?
Ok!

When I went to the market to buy lemons, they were super expensive, so we ended up buying a bag of baby lemons. I had no idea baby lemons existed, but Lauren thought they were "real, real cute" and my great math skills told me it was a better value to buy a bag of the little ones instead of the big ones individually.

With the amount of lemons, I was able to make two loaves.
The first one was from my very well used Company's Coming Muffins & More book.


And the second one was from a recipe I found on Pinterest.


If you've read any of my posts you know how much I love my Company's Coming cookbooks.
But, I was a little disappointed with this loaf.
It was flat, a little dry and quite subtle in flavor even though I added more lemon than the recipe called for. The glaze was good though. 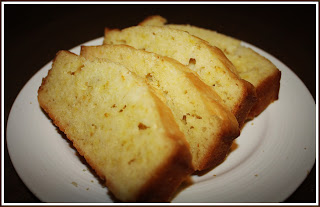 A few days later I made loaf number two. I had done a bit of searching on Pinterest for a recipe when I came across this recipe. The first line of the post was, "luscious, lemony, speckled with zest and very moist...",
I was sold!
A lot of the recipes I looked at said similar things, but most of them called for Greek yogurt, which I didn't have, and I had no intention of leaving the house to get some.

It was pretty much how the blog described it -
moist & lemony. The perfect mix of sweet and tart. It was delicious!
This glaze wasn't my favorite though, so if I make it again, I'll use the glaze from the the first lemon loaf. 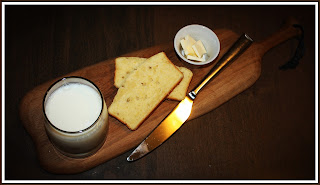 Sorry Jean Paré, but this lemon loaf was the winner.

It's not that I didn't like the first loaf, we gobbled it all up, I was just hoping for and expecting a moister, lighter loaf. I'm sure one day I'll try the recipe again. 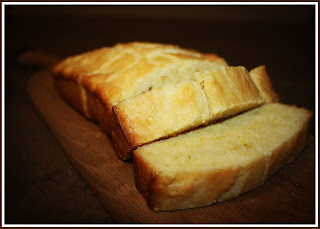 Bake for  one hour or until tests done.

Remove from oven and glaze.

Cool in pan for 10 minutes and then remove from pan,

Once cooled, wrap tightly to store.

Glaze:
Combine lemon juice and sugar in a small saucepan. Heat and stir to dissolve sugar.
Spoon evenly over top of hot loaf.


Lemon Loaf #2:
(Recipe adapted from Stick To Your Hips) 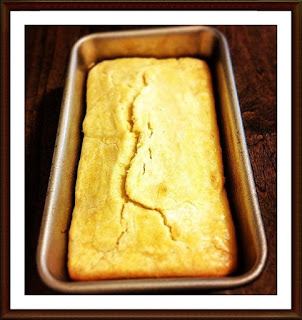 In a large bowl cream the butter and sugar until fluffy. Beat in the lemon juice, zest, eggs, and vanilla until well combined.

In another bowl stir together the flour, baking powder, and salt.
Add alternately with the milk to the egg mixture, beating just until combined after each addition.

Divide batter among prepared pans and bake for 30 - 60 minutes depending on size of pans.
While still in the pans, place loaves on a wire rack.

In a small bowl combine the glaze ingredients.
Pour over the hot loaves and allow to cool completely before removing from pans.

Once cooled, wrap tightly to store.

*As I mentioned above, I used baby lemons. I think it worked out that 4 - 5 baby lemons are equal to one big/regular lemon.

**With the second loaf, it made one loaf and 2 extra large muffins.