One of the things I look forward to the most in summer, is the fruit that grows on my grampa's farm - cherries, apples, pears, plums, and peaches! So good!


Every time we go to the farm to visit my dad (my grampa is in a nursing home now so my dad is running the farm), we leave with a ridiculous amount of fruit. I sometimes feel like I should say no, but I just can't!

Over the last few weeks we've had a never ending supply of peaches and apples. Seriously, at one point we had like 25 pounds of apples. 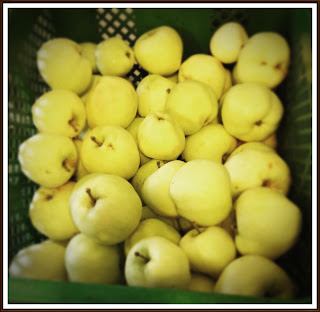 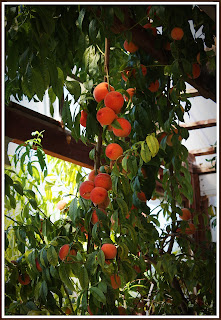 Considering the amount of baking I've done recently, I should have at least 5 posts ready to go.
But, I don't. Other than this peach crisp, I forgot to take pictures of ALL the stuff I made. Which is pretty awesome when you have a baking blog...

Anyways, we had a big bowl of peaches sitting in the fridge and some friends coming over for a BBQ, so something had to be made with those peaches.
Originally I was going to make a peach pie, but as usual I was running out of time. And to be honest, a pie seemed like a daunting task, but making a peach crisp, seemed like a great idea. 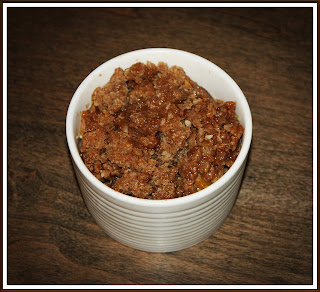 When it came out of the oven we dove right in, with vanilla Dairy Queen soft serve ice cream of course. That being said, I didn't get any pictures of it until the next day when the leftovers were already in the ramekin, and about to be delivered to my dad.

This was my first fruit crisp, and it was awesome! The topping was a mixture of oatmeal, butter, cinnamon and brown sugar. It was like a giant oatmeal cookie.
The filling was so good too, which may be due to the fact that my grampa's trees grow the juiciest, most delicious peaches.

The only "problem", if you can call it that, was that the peaches cooked down way more than I expected and the topping was really thick. No one seemed to mind though, because like I said, it was like a giant oatmeal cookie! 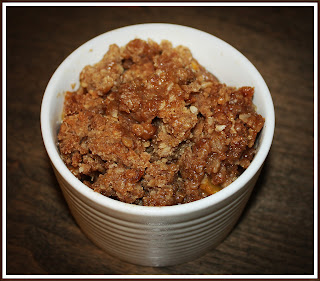 I found this recipe on Pinterest and modified it slightly. Making this peach crisp was so quick and easy! The most time consuming part was peeling and cutting the peaches. I liked it so much that I used it again the next week to make an apple crisp.
I had the same issue with the fruit cooking down a little too much and leaving a thick topping.  When I made the apple crisp, I knew I should've prepped more apples, but when you don't have one of those fancy apple peelers, peeling 10+ apples is just SO much work!

Mix in first amount of flour with peaches.
*Some of the peaches were a little tart so I added a small amount of sugar. I also used a little bit lemon juice to prevent browning.

Place fruit in the bottom of pan.

Mix together topping ingredients and spread over the fruit.

Bake for 35 - 40 minutes.
The top should be crisp like a cookie. If it's still soft, continue baking.