When I first asked Lauren what kind of party she wanted, she told me she wanted a Paw Patrol party. She loves Paw Patrol, so no problem.
But then she changed her mind about 37 times...first it was all about ladybugs...then Frozen, then Snow White, then Princesses in general, Frozen again, Curious George, and then back to Frozen. My "Lauren's 3rd Birthday" board on Pinterest is all over the place!

Lauren and Olivia are city kids but they both love being in the country. They love everything about it - the animals, the freedom, running in the grass and the dirt...oh the dirt! 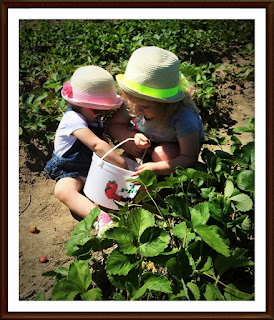 With this in mind, we helped Lauren out a little bit by booking her party at a farm. She was super excited when we told her, and then announced that she wanted a Frozen Farm party!

In true birthday party fashion, I had several late nights getting everything ready. But the night before was the longest.

My original cake and cupcake plan was to make a barn cake, farm animal cupcakes and cowboy hat cupcakes.
But as all the party work piled up, the cake seemed unnecessary and too time consuming, so I scrapped the barn and decided to just make the cupcakes.

I know I've mentioned in previous posts just how hot our house is. Well that night was no different. We were right in the middle of what seemed like a never ending heatwave, so we had to work with quick with the 50+ cupcakes that all needed to be covered in buttercream.
Around 11 pm, with all of our doors and windows open, we got started. I was going to make the cow, sheep and pig cupcakes and Dave was going to assemble the cowboy hat cupcakes.

These were what the cowboy hat cupcakes were supposed to look like...


Ya...like the cake, we ended up not making them. Why? Because they were an absolute nightmare!!
First of all, the gumdrops were a weird shape (not at all like the picture), so we had to try and reshape them - not an easy task. Then the licorice we bought kept breaking and wouldn't wrap around the gumdrops. Dave made late night run to the gas station to get some different licorice. We thought we had a winner because it didn't break when we wrapped it around. But, we couldn't get it to stay on. So after several attempts we threw the towel in.

As the time passed by, rather quickly might I add, I started on the sheep cupcakes. In my head they looked awesome, but in real life, without beating around the bush, they looked like crap! It didn't look anything like I wanted it to, and the icing was melting right off the cupcake.
Ok, so no sheep. And I decided not to make the cows. By this point we were so fed up with cupcakes. I swore that I wasn't going to eat any of them.

So now that the animals and hats weren't happening, we threw around a whole bunch of other ideas. We decided on a tractor pull apart cupcake cake. As we pulled all the cupcake liners off and started to place them in the shape of a tractor, we realized that we didn't have a board big enough to hold the tractor.
By this time it was after 1 am... 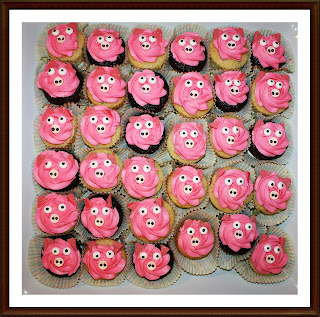 I think they look a little a funny - they remind me of pink versions of the Angry Birds pigs, which are actually pretty cute.  But considering all the cupcake chaos that took place and the fact that it was close to 3 am by the time I got to bed, I was happy with them. 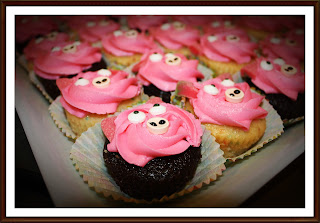 For the eyes I used Wilton candy eyes, the ears were watermelon gummy candies cut into triangles, and the noses were rockets with black piping gel nostrils. I ended up placing them in cupcake liners because it seemed wrong to serve them without. I think that was the sleep deprivation talking! 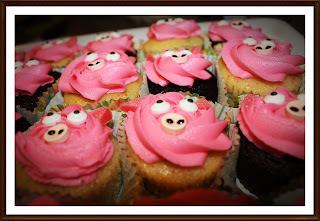 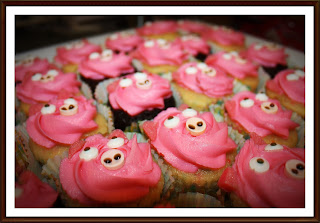 I think we had cupcake nightmares for about a week after!
But at the end of the day, Lauren loved them! And really, that's all that mattered! 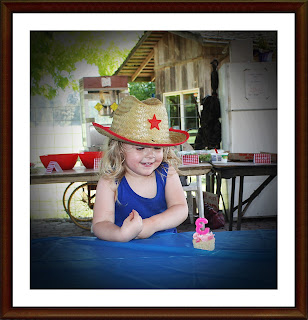 Here are some pictures from her party.

I made barn and tractor goodie bags for the kids that had farm animals, a bandana, play-doh and some treats in them. They also each got a cowboy or cowgirl hat that they wore on the tractor ride around the farm. 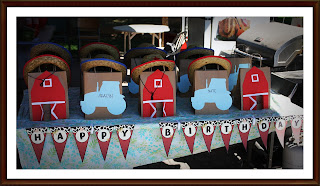 We had water and pink lemonade (not shown) to drink at the watering hole. 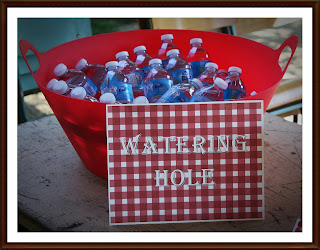 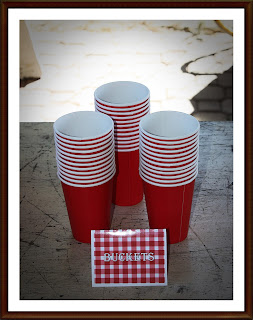 To snack on, taters (chips) and hay (veggie straws) 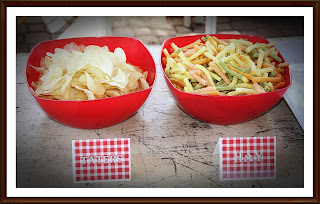 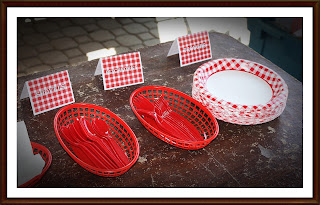 We didn't get pictures of all the food, but for lunch we served slop (pizza), and we also had farm fresh produce (veggies and dip and watermelon). And of course the sweet livestock (cupcakes). 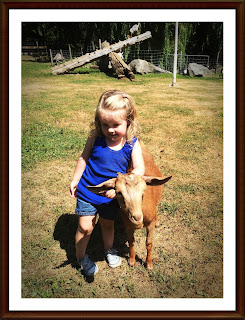 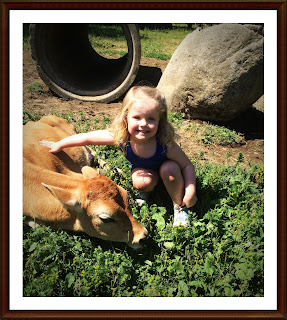 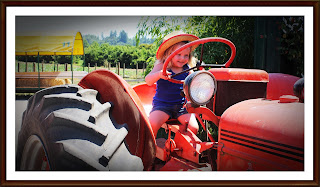 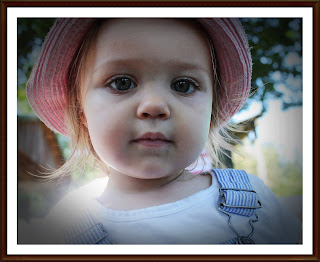