So how do no bake granola bars sneak their way onto a baking blog?
They taste delicious, that's how!
And...it was a busy week, so that's all I made!


In the spring and summer, actually regardless of the season, if it's not raining, we spend a lot of time at the park, beach, or playground. Our girls have a ridiculous amount of energy, so not only do they need to get outside and burn it off, I also need them to burn it off for my own sanity!
That and we live in Vancouver, a city full of beautiful parks and beaches - so why wouldn't we want to be outside?!

When we hit the great outdoors, I always pack a bag of snacks which usually consists of; muffins, cheese, pickles, cucumbers, grapes, goldfish etc.  I don't bring things like cookies or sweet treats, because even though I have a baking blog, we don't really eat that many sweets.
Quite often when I do bake cookies, cakes or cupcakes, it's mostly as and activity to do with the girls, and because I enjoy it.
I usually cut the recipe in half, that way we have just enough for dessert...For ONE day. 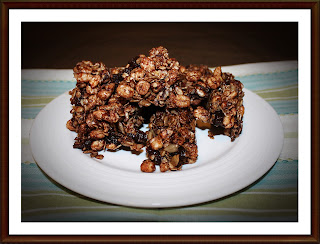 I'm not sure why, but I've been craving granola bars for quite some time.
I never buy granola bars from the store, because we really don't need them. I told myself that if I made my own, they would be healthier than store bought ones. And by healthier, I mean at least I would know what was in them.
I also thought it would be a nice treat to add to our snack bag.
So once again, the great recipe hunt started.

These granola bars from Simple Bites are full of so much goodness! Cinnamon, chocolate, seeds, oats, and more!
I should've cut this recipe in half because, YUM!
My mom used to make puffed wheat squares, and these granola bars totally reminded me of them. SO good!


The recipe called for brown rice syrup, but when I went shopping for the ingredients I couldn't find it.
Google told me that maple syrup or honey would be a good substitute for brown rice syrup, so maple syrup is what I used.
On a side note,  I also couldn't find mini chocolate chips...I understood not finding the syrup, but mini chocolate chips? Come on! 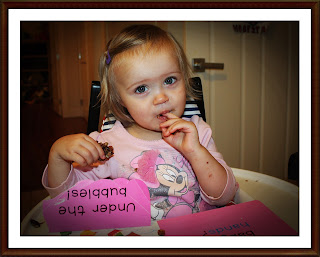 Believe it or not, Google may have lied to me...the only problem I had with these bars is that they didn't really hold together and make actual bars. My guess is that the syrup wasn't thick enough to bind them together and maybe honey would've been a better choice. They looked nothing like the ones from the recipe. But don't worry, we made do! 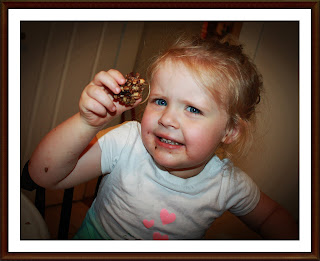 We got a few bars out it, but mostly just bite sized pieces and a granola "crumble". We didn't mind because the little bite sized pieces were full of oats, chocolate, puffed wheat, sunflower seeds and raisins (my girls love raisins - or raspberries as Lauren calls them). They were super flavorful thanks to the cinnamon and chocolate chips that melted throughout. I also liked that they were soft and chewy.


With the really crumbly bits. we sprinkled it over some yogurt...no point letting it go it waste right?

And the girls enjoyed their granola bars while doing some reading. 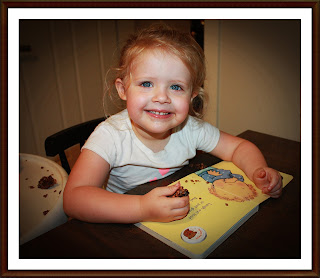 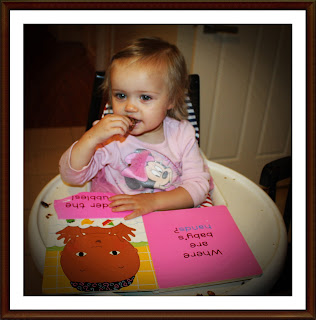 In a medium, saucepan. combine the oil, syrup, sugar, cinnamon, vanilla and salt.
Place over medium heat, stirring occasionally until it comes to a boil and the sugar is dissolved.

Pour syrup over cereal mixture and stir with wooden spoon to combine well.

Press the mixture into the oiled pan and refrigerate for about an hour.

Cut down the center lengthwise and then into bars.
Serve, or store in an airtight container.

Refrigerate for up to 10 days or freeze.


Oh, and in case you were wondering, they never made it into our park snack bag! 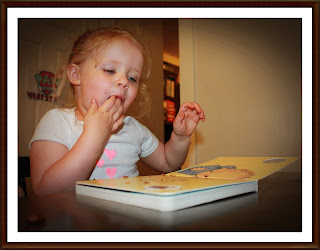 Update:
I remade these granola bars the other day, again with maple syrup, and they turned out great. They stuck together and made actual bars! The only thing I did differently was add more oats and puffed cereal - about an 1/8 - 1/4 cup of both.
Posted by Amanda at 11:20 PM