One of my favorite vegetables is zucchini.
I know...zucchini is kind of a weird favorite since it's pretty tasteless and bland. That being said, celery is another one of my favorites.
So what does that say about me? Actually, don't answer that.


What I like about zucchini is the texture and how versatile it is. You can add it to a stir-fry or pasta sauce, bake in the oven, grill it on the BBQ and so much more. If you have a spiral slicer, you can make zucchini noodles which are yummy! And since this is a baking blog, I can't forget about making muffins, cookies and loaves!

Earlier this week I remembered that I had two small zucchinis in the fridge. I wanted to do something with them before they went bad, so I decided to make a zucchini loaf. I was originally going to make a plain one, but after doing some late night research, I decided to make a chocolate loaf instead. A chocolaty treat never hurt anyone, right?

I found this recipe on Skinnytaste and used it as a guide to make my loaf.
The changes I made are in the recipe posted below. 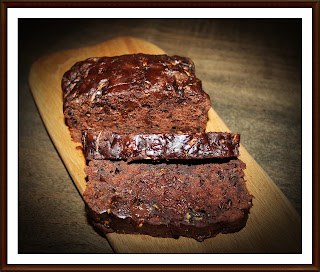 When the loaf was baked, Lauren saw it and got excited. She didn't know what it was, but she knew it was chocolate and had chocolate chips in it.
I was undecided about whether or not I should tell her it had zucchini in it - Lauren hates zucchini.
She will pick out every last piece of it when we have it for supper, which is totally fine with me. We're all about letting out kids decide what they like or don't like. We encourage them to try new things, but never force it on them. 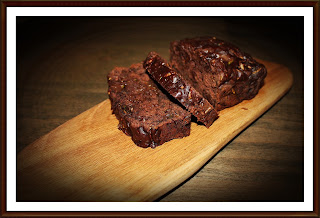 Plus, I've noticed she has some of the same weird food/eating quirks I have.
If I know something I don't like is in what I'm eating, I can't and won't eat it. Even if I can't see it or taste it, I won't touch it.

Because of that I felt like I needed to come clean to her and I ended up telling her what was in it, not just the zucchini, but all the yummy ingredients like applesauce and eggs etc. It's not overly surprising, but she really didn't care...at all!
Her response was, "Whaaaaaat??!!" and then she ran away. 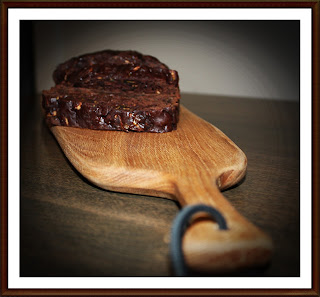 The loaf was pretty good. It was quick and easy to make, had a decent texture - it was fairly moist, not too dry and it was very flavorful.
It was a little too chocolaty for Dave - I didn't know there was such a thing! But Lauren on the other hand tried it and loved it. Olivia ate some, but could take it or leave it.
The only problem I had with it, was that after a day or so the middle got really soggy and pasty. It seemed under cooked, which it wasn't.
Honestly, it kind of  grossed me out when I took a bite. I think it was maybe from too much moisture from the zucchini.
Another one of my weird quirks is that if I eat something and have a bad experience with it, (taste/texture/don't feel well after I eat it), chances are I won't try it again. So, if  I make it again, I'll be sure to dry out the zucchini a bit before adding it.

Whisk eggs, sugar, applesauce, oil, vanilla and melted chocolate in another large bowl until blended. Add the dry ingredients and stir with a rubber spatula until just combined. Fold in zucchini and chocolate chips. Pour the batter into the prepared pans. 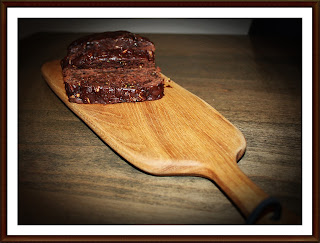 Lauren also informed me that she now loves zucchini, or cococchini as she calls it. We'll see what she has to say next time we have it for dinner. When it's not hidden in a chocolate loaf!

Serving board by Joseph Réal Design